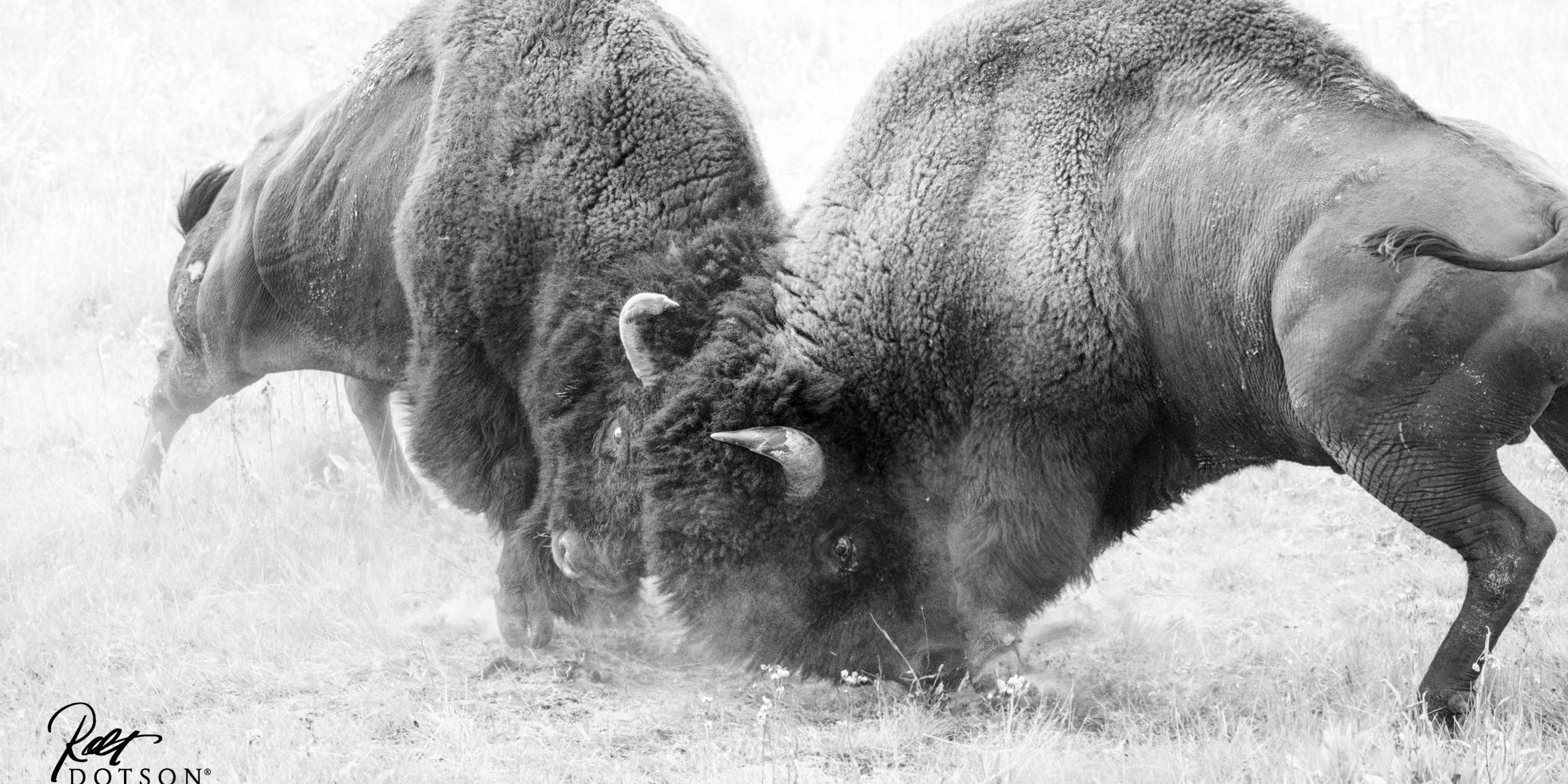 
August is a month of reckless chaos in Yellowstone National Park – spring flood devastation aside. This is the month noted on my annual photography calendar to focus on Yellowstone’s bison herds. (Not just the creepy August shoe with a foot inside found floating in the Abyss Pool.) The season of bitter battles among dominant bulls is the rut where rivals battle to win the affection and right to breed females. Rarely do these battles not end with broken egos, ripped out fur and hide, blood and wounds a plenty. So following is a summary of my observations over the past month watching rutting bulls and cows along with a few of my favorite images from the ‘can’t look away’ ma-lay.

Note: the term bison and buffalo are the same thing, with bison being more technically accurate. But we don’t get caught up in the details. 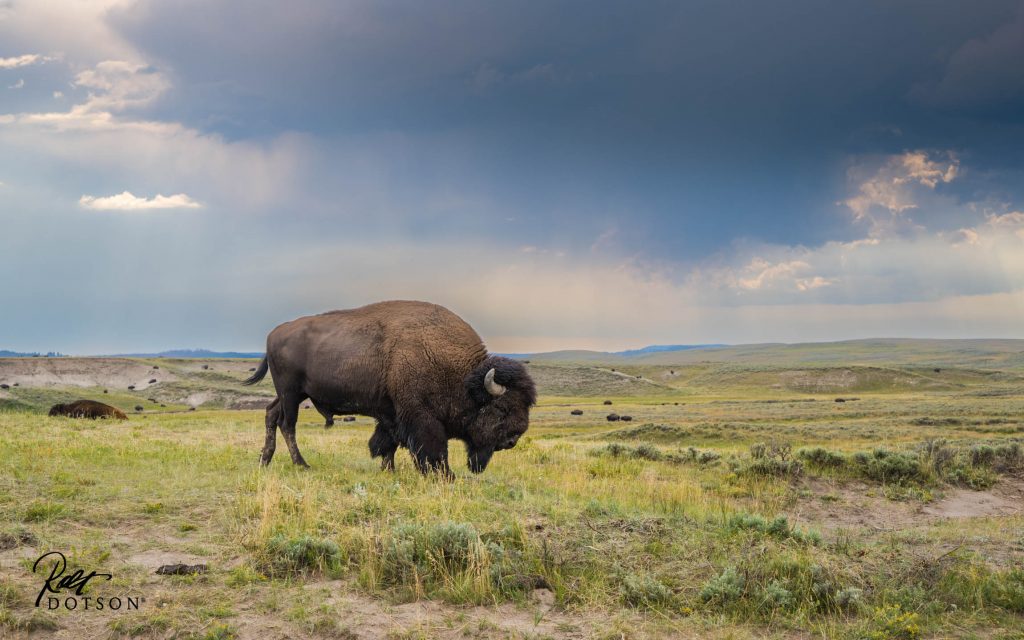 King of the Hayden

When Kelli and I undertake our early morning excursions to photograph the rut, we never know if we will find the herds. On rare occasions you can count the bison on two hands. But more often than not, hundreds will fill Hayden Valley and other grasslands (e.g. Lamar Valley, however closed due to early floods in YNP) found within Yellowstone. Sometimes you get the bonus treat where morning fog filled the Hayden as the sun rose revealing several herds crossing the Yellowstone River. 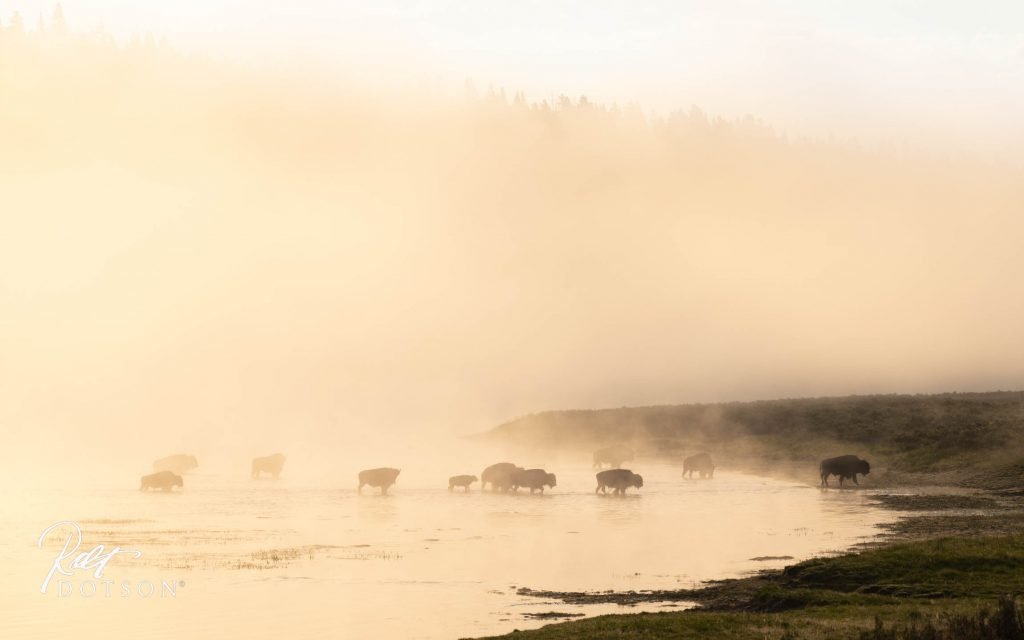 Before I get into the fisticuffs, I must answer the most common question I get regarding the rut. Do I have to hike very far to photograph bison? No. In fact bulls are extremely dangerous this time of year. As a result, I stay close to roads and when possible photograph from my Land Rover Defender. Bison make me much more on edge than even grizzly bears. Reason being there are a plethora of nasty bulls roaming around at any one time so you constantly have your head on a swivel. Furthermore, they are agitated before you arrive. Lastly, they want to fight anyone and anything that threatens their mating rituals. Bad combination. As a result, it is common to see bison attack cars and every year gore tourist onlookers who make bad decisions crowding big males. Below is one of many stupid tourist moves I have witnessed involving these over testosterone laden bulls. Selfie stick isn’t good protection! Check out the eyes on this bull bison. For the record this man dodged tragedy by a whisker. 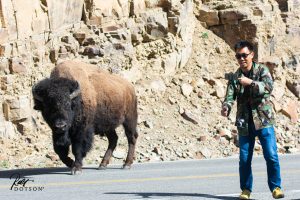 On to the good stuff with the danger warning now laid out. Bulls are fighting for the right to mate with a harem that may be in excess of 40 females. So the motivation is powerful. Younger bulls will search out females that are in estrus early by tasting the air with their tongues and getting up close and personal. As the rut progresses, bigger dominant bulls weighing upwards of a ton (2,000 lbs) will push the 1600 lb ‘light weights’ out of the game. During these encounters, the Hayden kings bare every trait of a real bad boy. Rolling repeatedly in dust/dirt bowls, tearing up trees and sage and my personal favorite, urinating in the dirt and rolling in it (see image below). All accompanied by exhaling a massively deep guttural warning to nearby rivals. 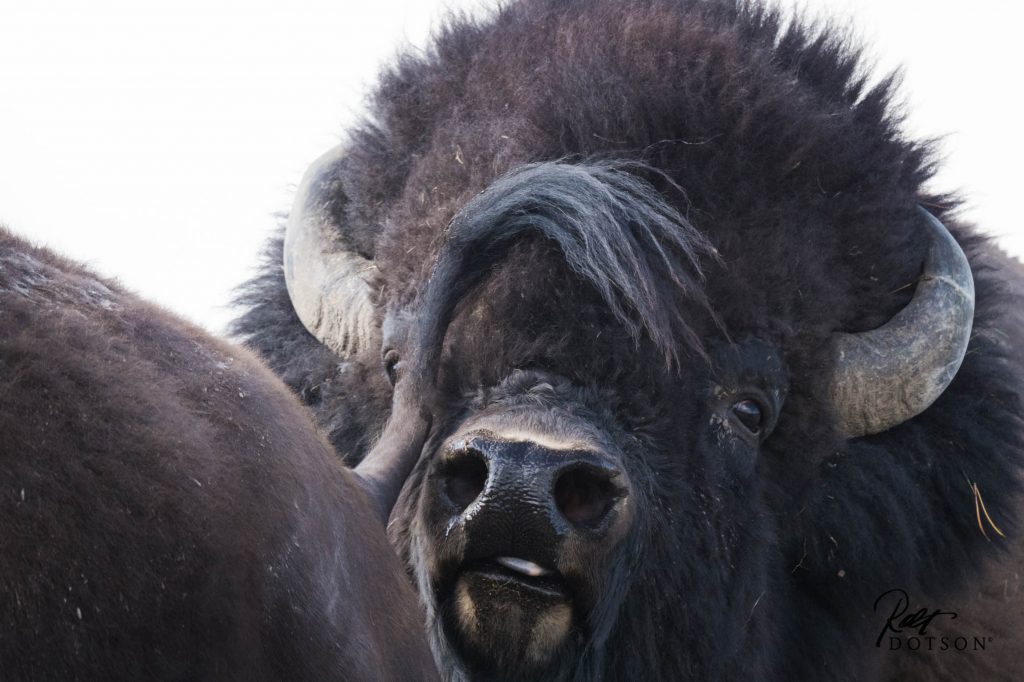 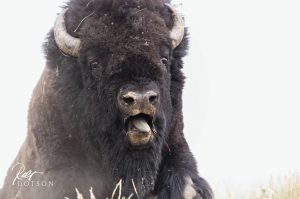 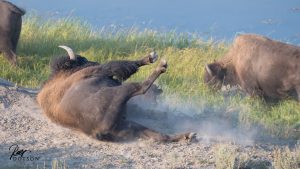 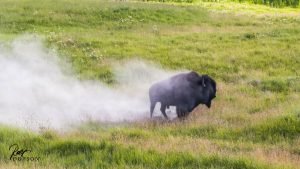 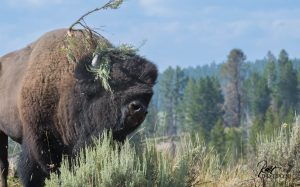 Serious fights are avoided by the vast majority of bulls. In part because so many are easily over matched and they recognize the danger of deadly injury. This results in the vast majority of bison square offs lasting no more than 30 seconds. (Notably, about the same amount of time my personal brawl lasted to defend my high school girlfriend!)  When the big boys get to busting it up, however, the battles can be ominous and spine tingling. Lasting several minutes plus with combatants attempting to knock each other off their feet. All the while the bulls are fully aroused, urinating and even fighting with full-on erections (see images below). The winning alpha usually comes down to powerful domination from repeated head clashes coupled with hoof speed and horns ripping both fur and flesh (e.g. note the chunk of hair behind the leg of the bull below and the split horn). 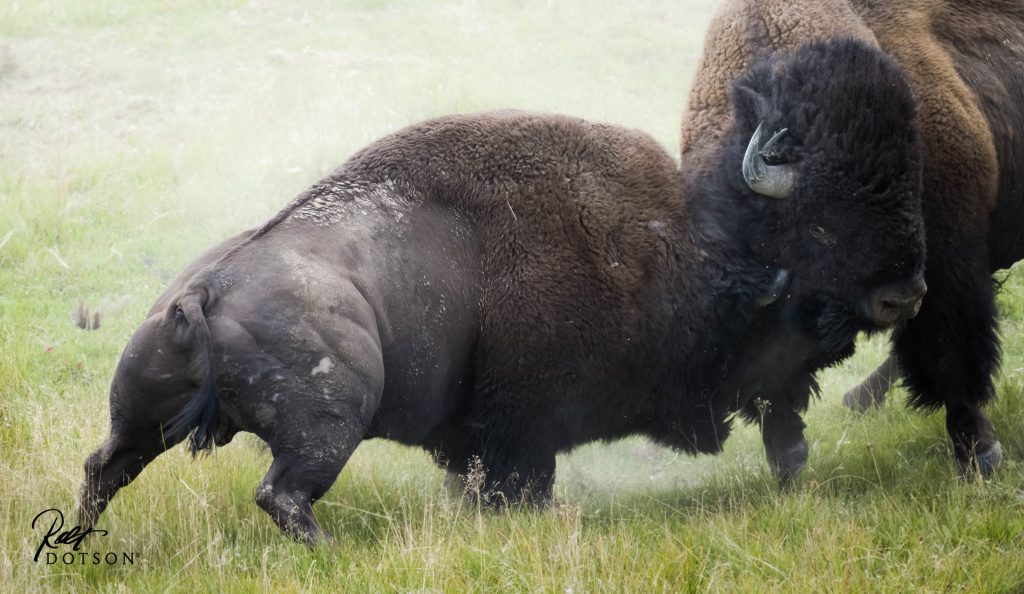 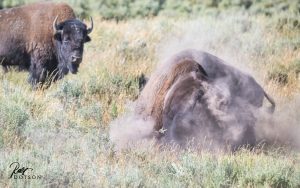 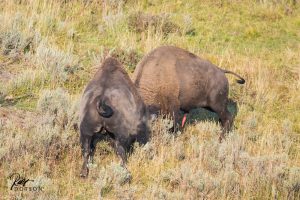 The aftermath of the rutting season can be brutal. With bulls becoming blind and lame (See bull below missing eye). Making themselves easy prey for both the grizzlies coming out of the high country having fed on pine nuts and cutter moths all summer and wolf packs looking to feed their growing young of the year. Also noteworthy, on one day several weeks ago, three bison were hit by cars. Killing one bull and breaking the legs on two others. A reckless shame that gets little attention. 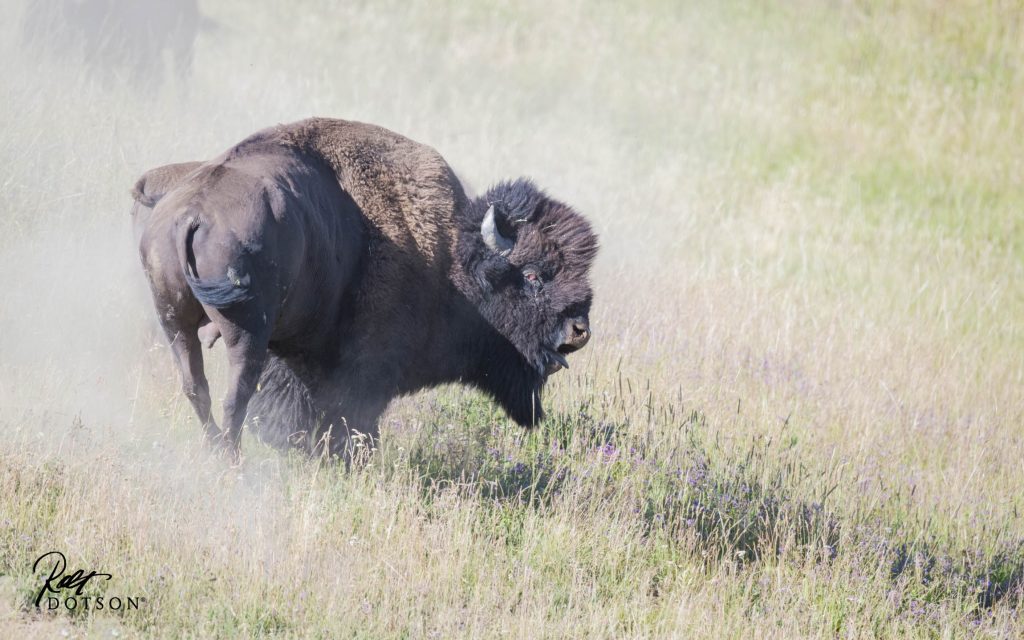 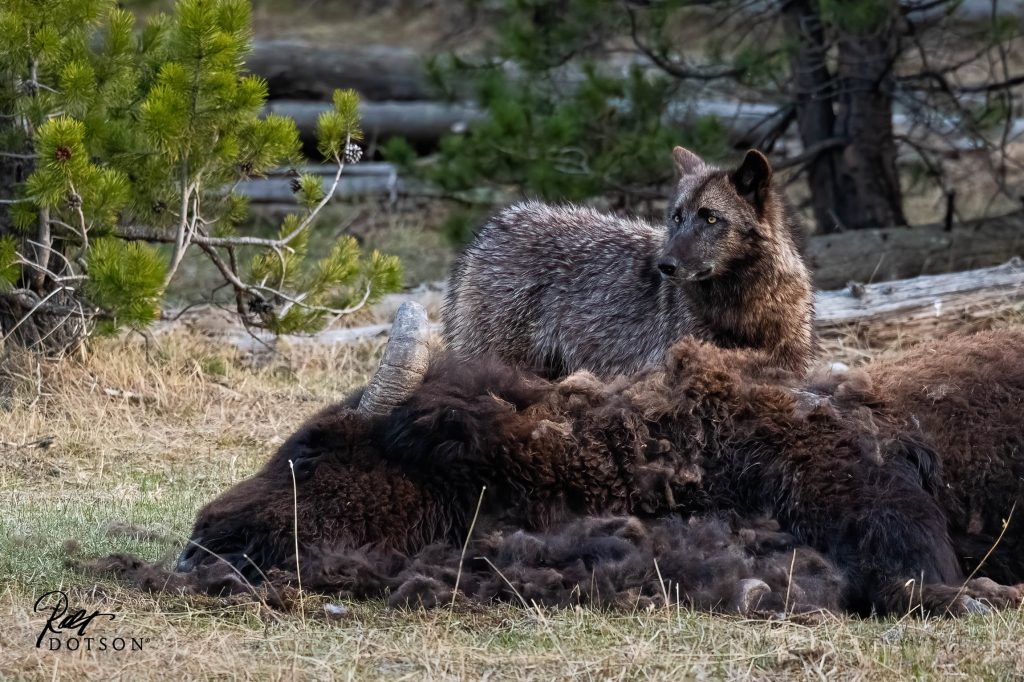 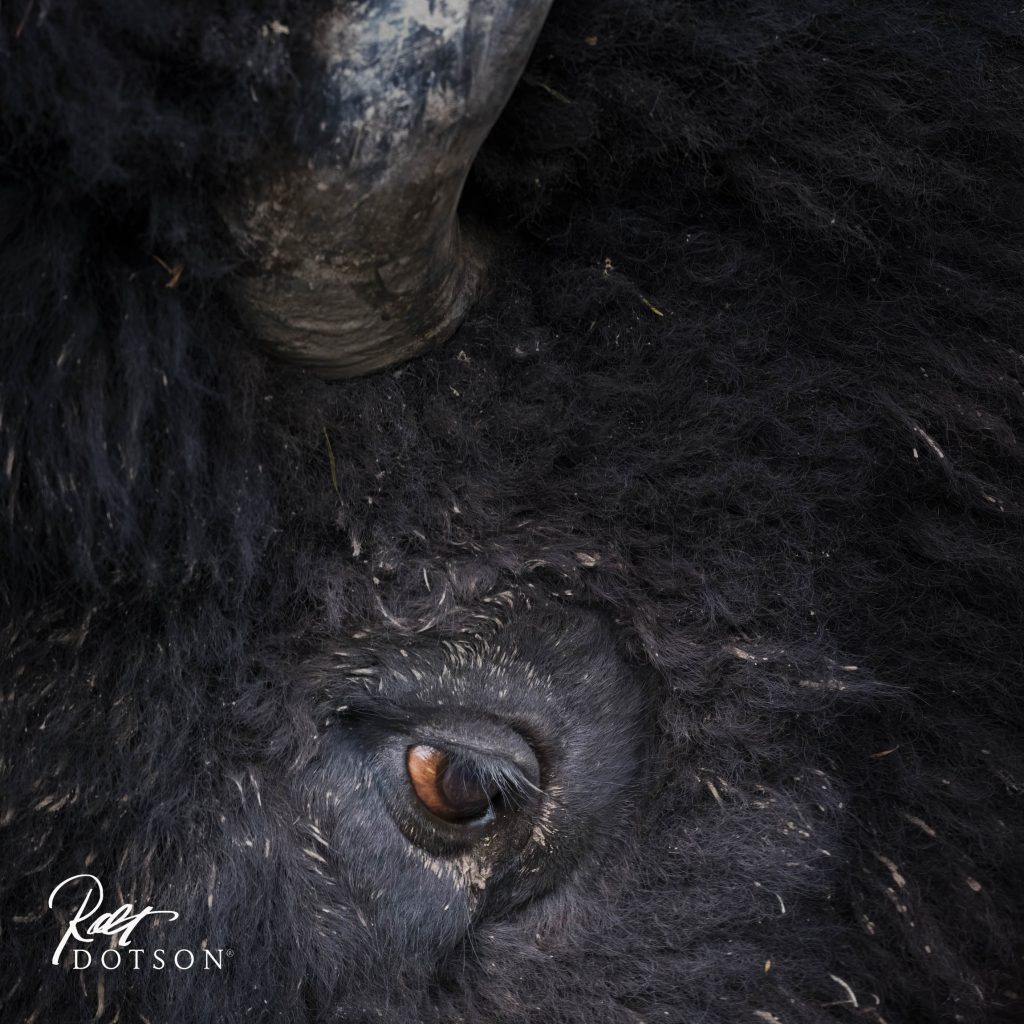 To view our ultra limited-edition fine art selections follow the link below: 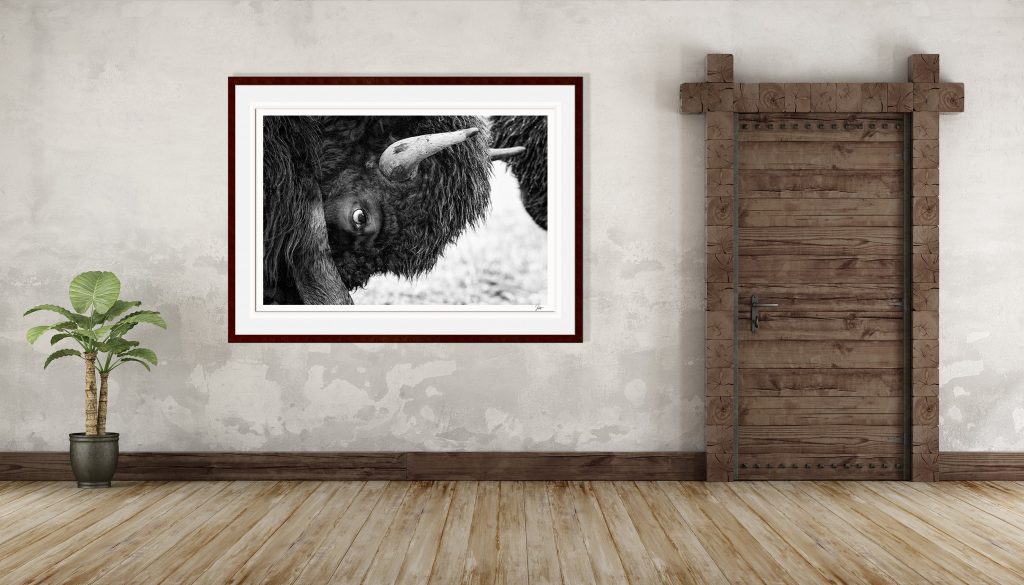 Thank you for following our Adventure Blog here at Dotson Images. Committed to bringing you the best of nature 100% wild and raw.

View the resilient Arctic Owls of northern Minnesota as they hunt the frozen landscape
March 21, 2022