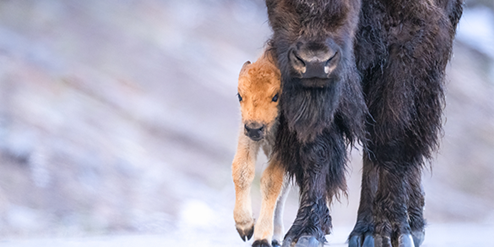 The past two weeks has been the seasonal restart of photographing bison calves. A mesmerizing time to be inside two national parks as they open their gates for the season – Yellowstone and Grand Teton National Park. While this may seem idyllic as all the new babies are showing up, there is a reality of early spring birthing that brings its own stark reality, and it lives micrometers underneath the surface.

Adult female bison carry their calves to term during winter, the harshest season in the harshest climate in the lower 48 – Yellowstone National Park. As a result, early spring calves are often stillborn, and many mothers themselves don’t survive the birthing. As a result, coyotes, grizzlies, black bears, and wolves are waiting to feed on the carcasses from winter weakened adults, afterbirth, and any unattended calves (aka red dogs, as the rusty colored newborns are called).

Within an hour, or two at the most, these newborn calves are up and walking to allow themselves the mobility to keep up with the herd and the protection a big herd of moms can provide. The lead photograph for this feature was taken along the Madison River as a freshly minted red dog was struggling to use its newfound limbs. It wandered alongside its mother like an Irish drunk after a hard night watching, or competing in, a knockdown Conor McGregor MMA fight.

Only by leaning against mom’s hefty tree trunk limbs could the little guy stay upright as they made their way to join the heard.

Shortly newborn red dogs will be a common sight among the herds of cow bison both filtering back into the National Parks and migrating to birthing grounds. This is the more optimistic time where the little guys are kicking up their heals as if they can’t stand not getting full use. 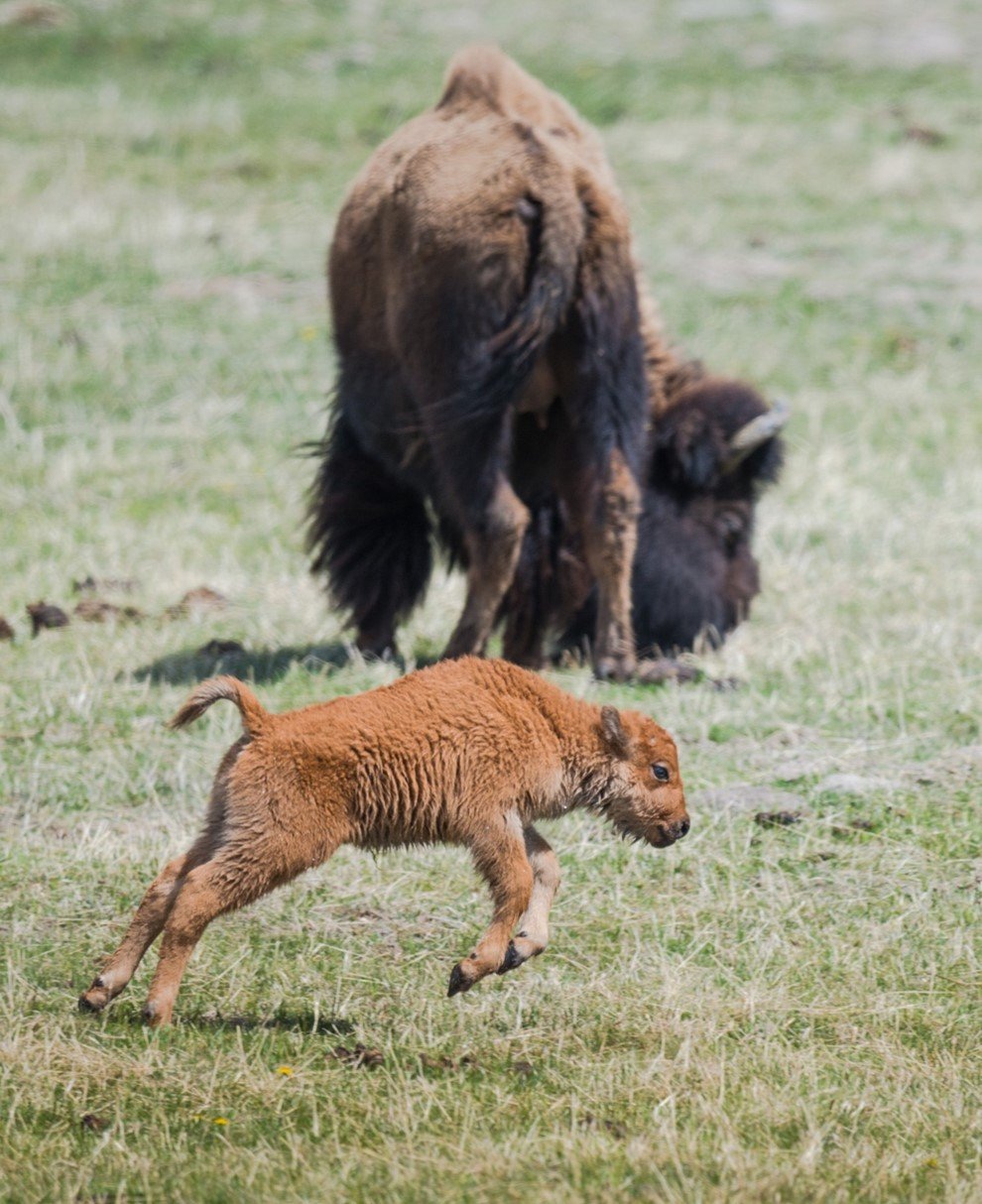 It doesn’t get easy for these little guys. Being small is not a wilderness advantage. Once control of the limbs is mastered the surviving red dogs must follow their mothers and the forming bison herds as they migrate across swollen spring rivers. As a result, it is not an infrequent sight in early season to see newborn red dogs drown. I can’t forget a small herd of 6-7 bison cows and yearlings crossing a swollen Lamar River in Yellowstone’s Hayden Valley several seasons ago.

The last adult female to make the river crossing was the only one with a newborn. I remember softly whispering a plead under my breath, “…Don’t do it girl. Damn it, don’t do it.” Her hesitancy was palpable as she entered the water and starred back at her reluctant calf to come along. Eventually the instinctual pull of the herd of bison cows who had already crossed the currents was too much. She began her swim with her little guy at her side. 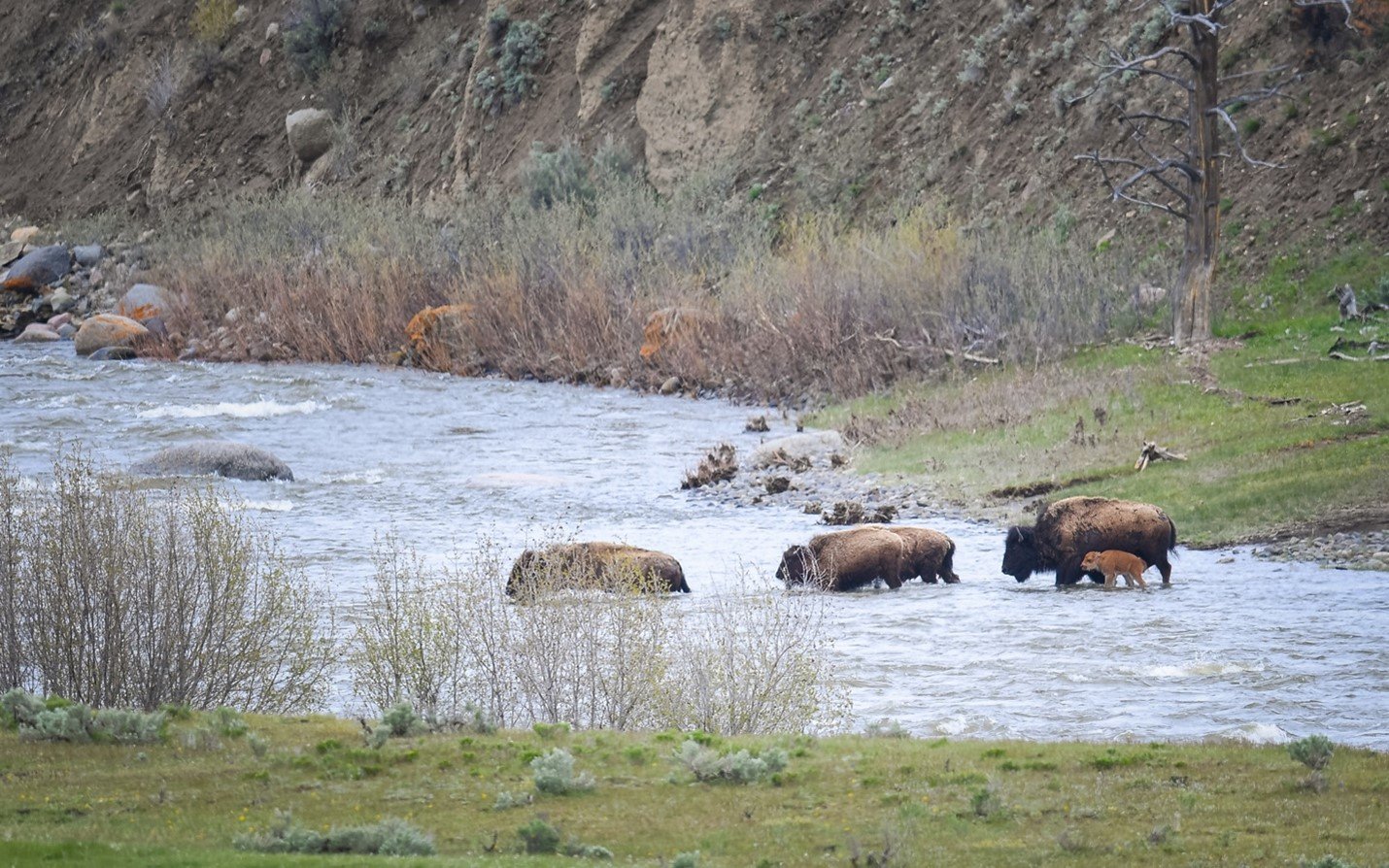 Within 3-4 meters the baby was swept down river. The panicked mother turned downriver to block the current but found herself also no match for the vicious flush of spring currents. She eventually fought for her own life as her young red dog’s nose repeatedly disappeared. Eventually not resurfacing. 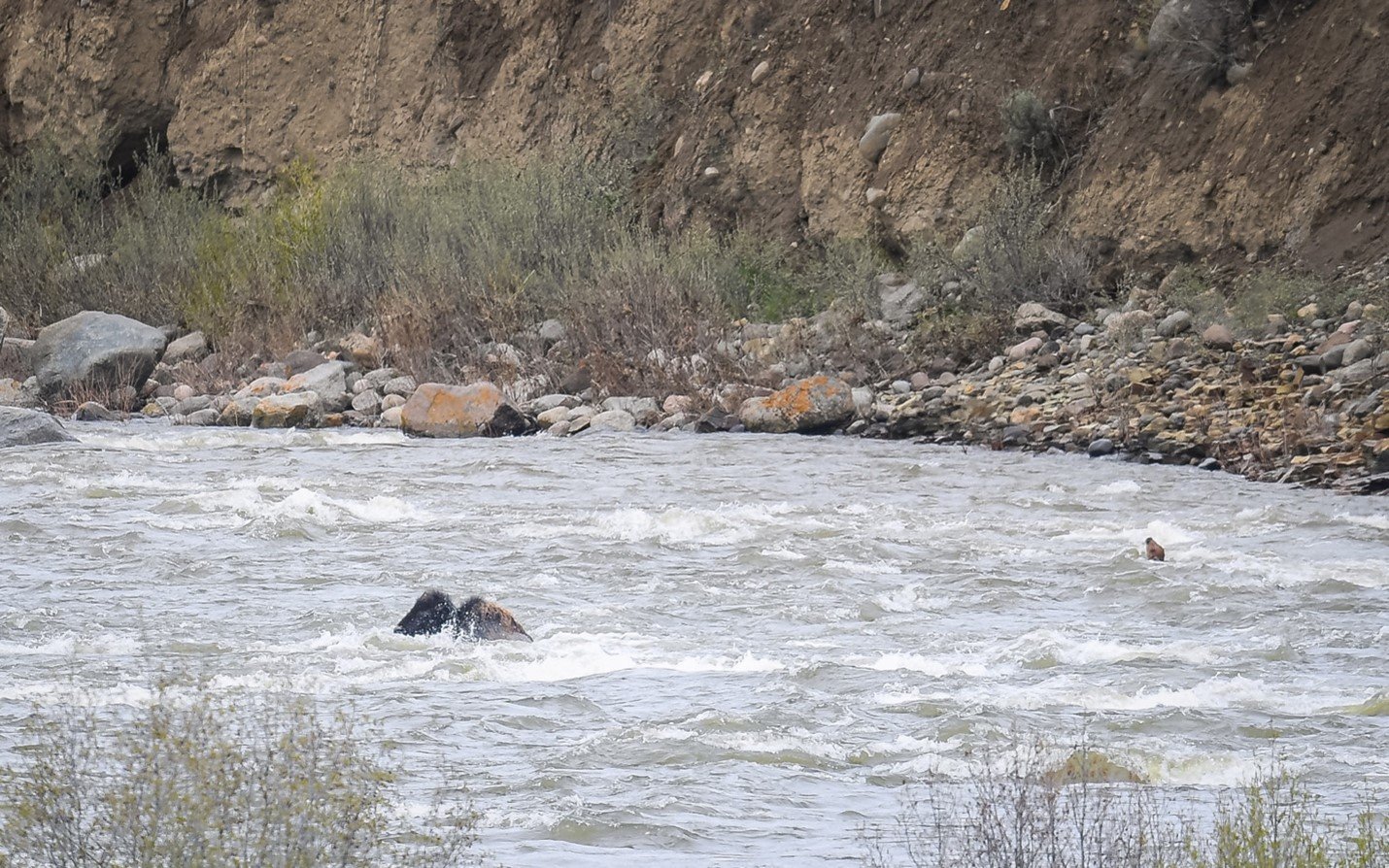 My last visual was seeing the mother as she repeatedly left the herd running to the bluff overlooking the crashing currents downstream. Hopeless loss for this season. 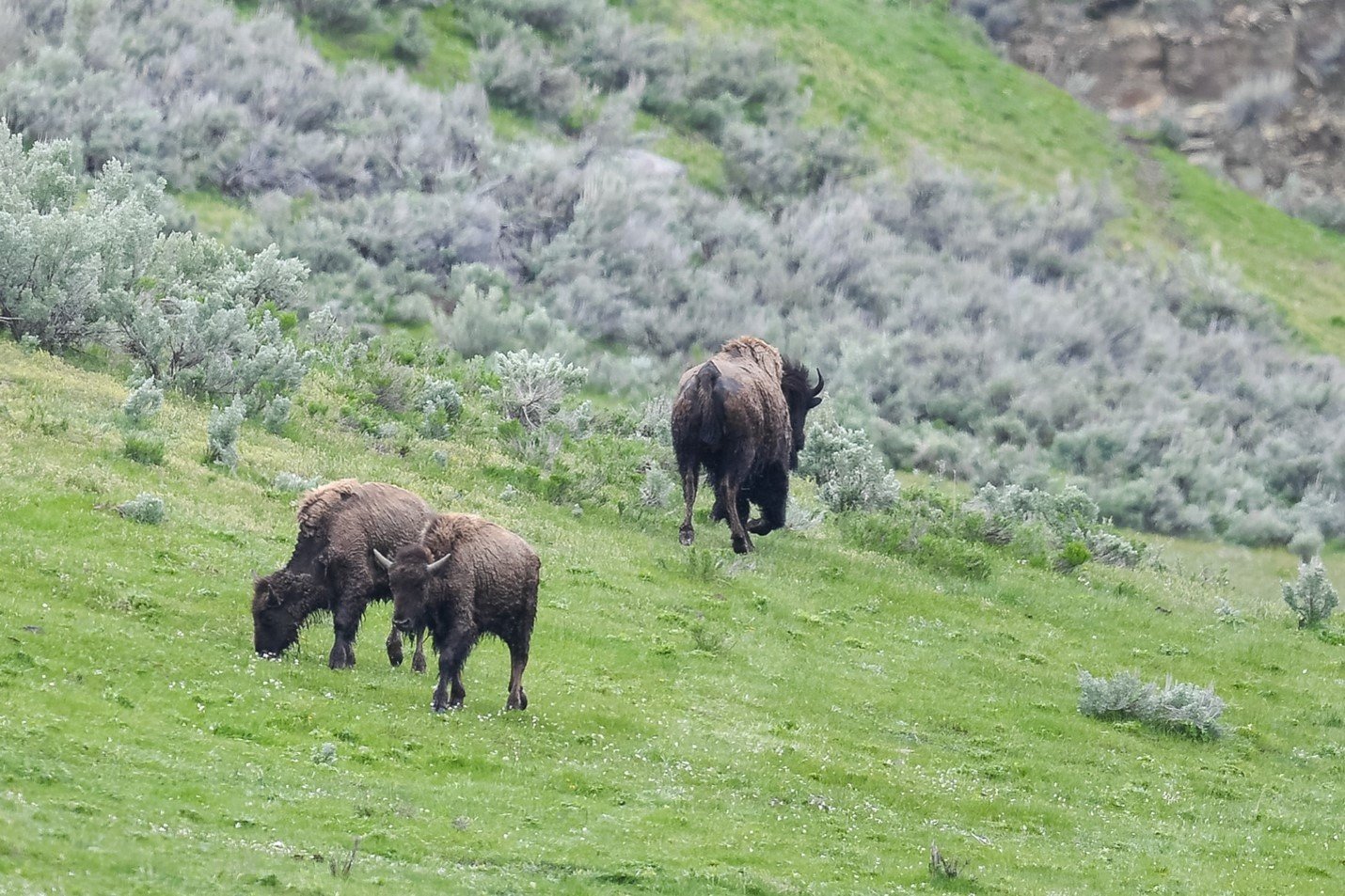 I will sign-off with one of my favorite bison images found in our Fine Art Wild Life collection. A successful crossing, this time, of a cow bison shepherding her newborn calf across the Yellowstone River in Hayden Valley. To get the shot I laid in the soggy water’s edge as a small herd entered the water. Using my lengthy 800mm lens, to not impair the crossing, I snapped off a couple shots and captured the all-watching eye of mother and baby. 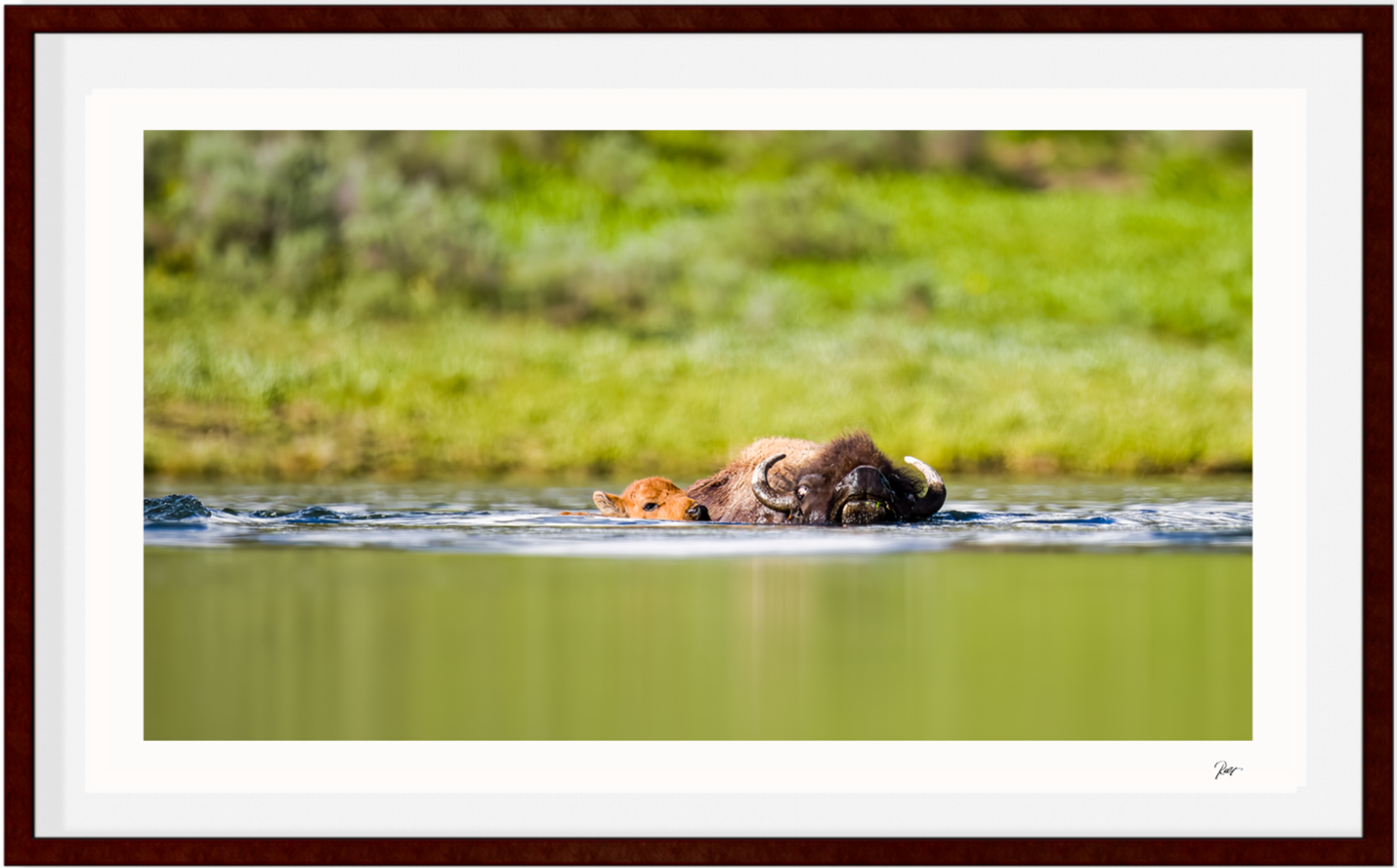 View the resilient Arctic Owls of northern Minnesota as they hunt the frozen landscape
March 21, 2022